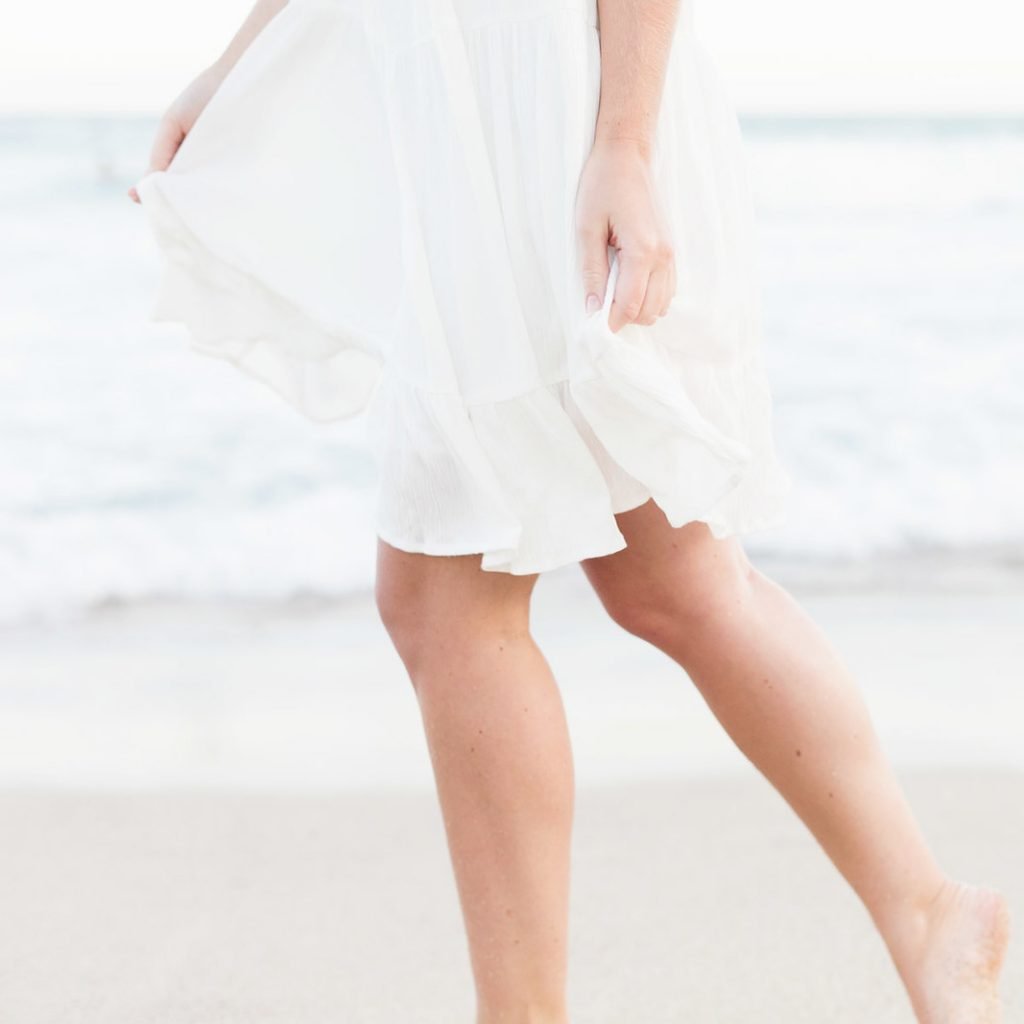 Three Months Guys–I’m in disbelief that it has already been three months with this sweet boy. 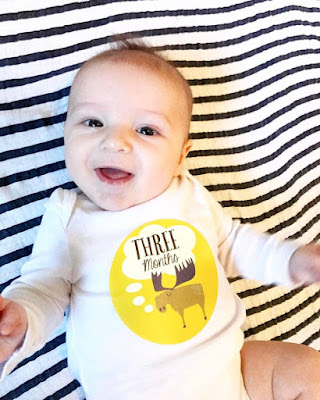 It’s so hard when your last baby is growing and changing right in front of your eyes. You kinda have a love/hate relationship with it. You love that they are hitting their milestones and growing, but you hate that your brand new baby is no longer brand new. This sweet boy had his first family trip to Disney this month, and he also went to the fair and Dinosaur World. I like to say that Carson has developed his survivor mode. If Bennett comes near him with tons of toys he no longer lets out yells or screams he kinda just deals. I love the relationship these two already have.

Weight: 12 lbs. 5 oz, but I really don’t know.
Height: Not sure, we go next month!
This boy is actually gaining as much as his brother was at this point. He’s going through a nursing strike, but I’m not too concerned. I’ve started just pumping and giving to him cause it’s just not worth listening to him scream every time I go to nurse him. Ya’ll I’m not talking a little yelp. I’m talking SCREAM.
Hair: It’s actually getting lighter. 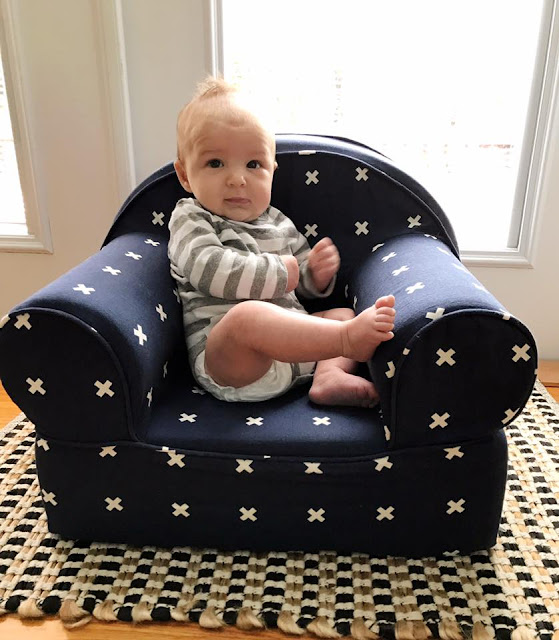 Eyes: Brown, but they seem to change to green sometimes when he is against a different colors.
Diapers: Size 2
Clothing: 6 Months, but I squeeze him into some 3 months if I want him to wear something. We just stretch it.
Sleeping: He’s a great napper and a sleeper like his brother was! He naps 3–1.5/2 hour naps and then a 30 minute nap in the evening. He then sleeps from 7ish-4AM with a dream feed between 10:30/11. He will then go back to sleep until 7ish.
Eating: He eats about every 3 hours with the exception of night time. 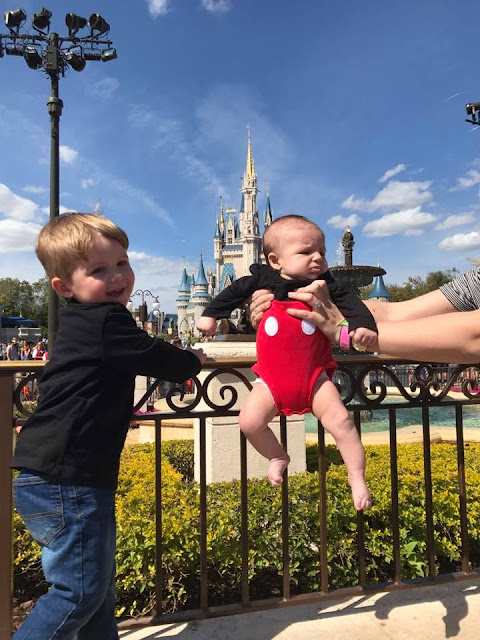 Family: I would say Bennett is still in love with Carson at this point. He loves sharing his toys (cause he doesn’t take them yet), and giving him lots of hugs and kisses. Don’t try to go get Carson from his bed before Bennett goes in there…he doesn’t appreciate that. Carson is such a smiley baby and loves smiling at everyone, really. He likes when Daddy makes funny faces and when Pop Pop carries him around facing out. Both Grandmas love to talk to him and he chats right back. It’s love ya’ll.
Myself?: I’m doing great actually. I love having two boys. We are super active and Carson is along for the ride wherever we go. He either sleeps in his car seat or in the carrier if we are out and about during a nap time. He is such a good baby and I am extremely grateful for this. Oh, I’ve also been eating a ton of boob cookies. #sorrynotsorry. Recipe here.

Back in August, I did a post on Breastfeeding Essentials–you can find that here. I swear by everything on that list.  I’ve been pumping a lot lately and these are some of my must haves that I have found so very helpful. Did I miss anything?
1. Nipple Cushion– This is something that you don’t think you need…and then you get it and your like “where have you been all my life”. This cushion significantly reduces the discomfort of pumping.
2. Extra Bottles- I used Medela since I already had them with my pump. Once I pumped I would store them in these bottles, and then freeze whatever was leftover at the end of the day.
3. Medela Pump in Style– I received this pump through my insurance, and I actually had another from when I had Bennett. I keep one in the living room, and one stays in my bedroom. I swear by this pump. I have used it in the car as well, we have an outlet in our car–but they also have a car adapter and a battery pack.
4. Lansinoh Bags– These are some of the only bags that I found to not leak. I also love these because they make it easy to pour into bottles–trust me, it’s a task to not spill that gold.
5. Upspring Breastfeeding Supplement– I throw this in my morning overnight oatmeal smoothie, it has a delicious taste–and I promise I’m not joking. It really does taste good. I have even drank it in milk and not choked like some other drink mixes.
6. Boobease Nipple Balm– I put this on right before I go to pump and right after. It definitely makes a huge difference vs. pumping without anything on.
7. Belibea Nourish Cami– This tank top is pure amazingness. I’m in love with the fact that this can be worn out and about (it has pads in it), tucks in that loose skin, and can be a nursing or pumping cami. I wish I would have had this when I had Bennett…and I kinda need to order another.
8. Bebe Au Lait Nursing Cover– I use this both as a nursing cover and when I am pumping in the car. I leave this one in the car so that it is always handy if I do need it.
I received a items to share in an honest review. This post also contains affiliate links. As always, all thoughts and opinions are my own.

Bless all you kindergarten teachers. Or any of tho

I’ve got another after school snack recipe for y

How are you celebrating National Book Lovers Day?

We started our first day of homeschool today, and

What supplements do you take? You’ve got all the